DISINFORMATION AND DIGITAL MEDIA AS A CHALLENGE FOR DEMOCRACY

DISINFORMATION AND DIGITAL MEDIA AS A CHALLENGE FOR DEMOCRACY

New chapter published in “Disinformation and Digital Media as a Challenge for Democracy” by Georgios Terzis, Dariusz Kloza, Elzbieta Kuzelewska, Daniel Trottier (eds.), on “Should We be Afraid of Fake News?” 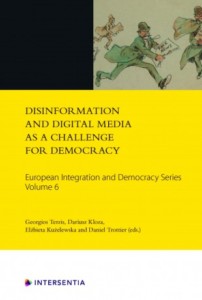 “Over the past few years “fake news” has dominated public discourse, being blamed for anything from affecting electoral results to manipulating consumers, ultimately giving online social media and internet platforms a bad name. However, I believe that there is no such thing as “fake news”. For the reasons explained below I think that “fake news”, a contradiction in terms, is merely a neologism, a clever catch-phrase used today by politicians in order to swiftly discredit opponents and at the same time wink at their voters. The only thing different from similar phenomena in the past is the internet and its champions, online social media platforms, that provided a suitable environment for the deployment of such “fake news”. However, this to me being merely an early-adoption problem that will be addressed once these new technological phenomena have been properly assimilated by society and social sciences, I believe that legislators, no matter how concerned in the short term, should sit this one out”.